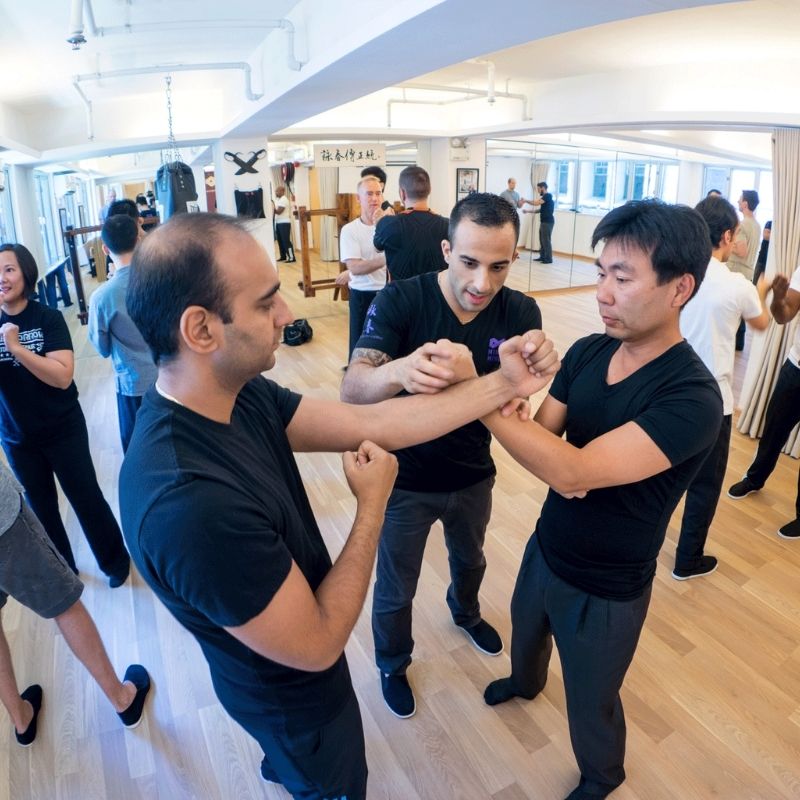 This class is an all-rounder! It covers all aspects of Wing Chun training, including the Forms, Chi Sau and self-defence techniques. We recommend that you participate in at least one of these classes per week so you can practise the techniques required for moving up within our curriculum and grading system. 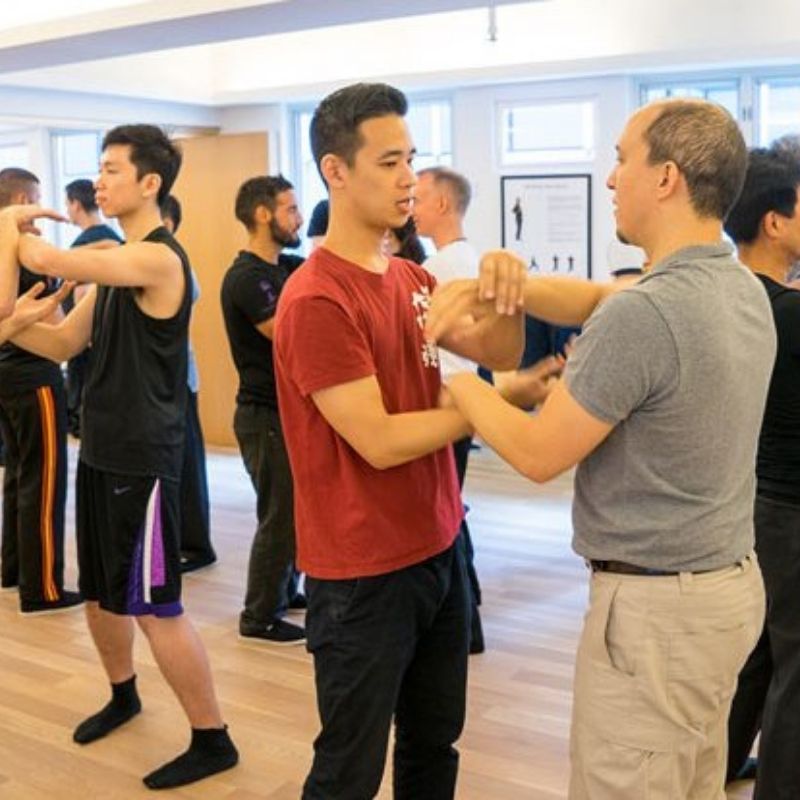 This Class is exclusively for you to practise the Chi Sau (Sticking Hands) exercise. Chi Sau is the main exercise for practising the fighting techniques of Wing Chun. It is the application of the movements and principles from the Forms, so once you’ve learned how to mindfully relax your body during the movements of each Form, you then need to learn how to apply and maintain that relaxation under the pressure of incoming force.

Ultimately Wing Chun tries to apply its strongest structure on the opponent’s weakest point, to take advantage of leverage, misdirected force, poor structure and technique. So Chi Sau is the playing field on which to explore these strong and weak elements. 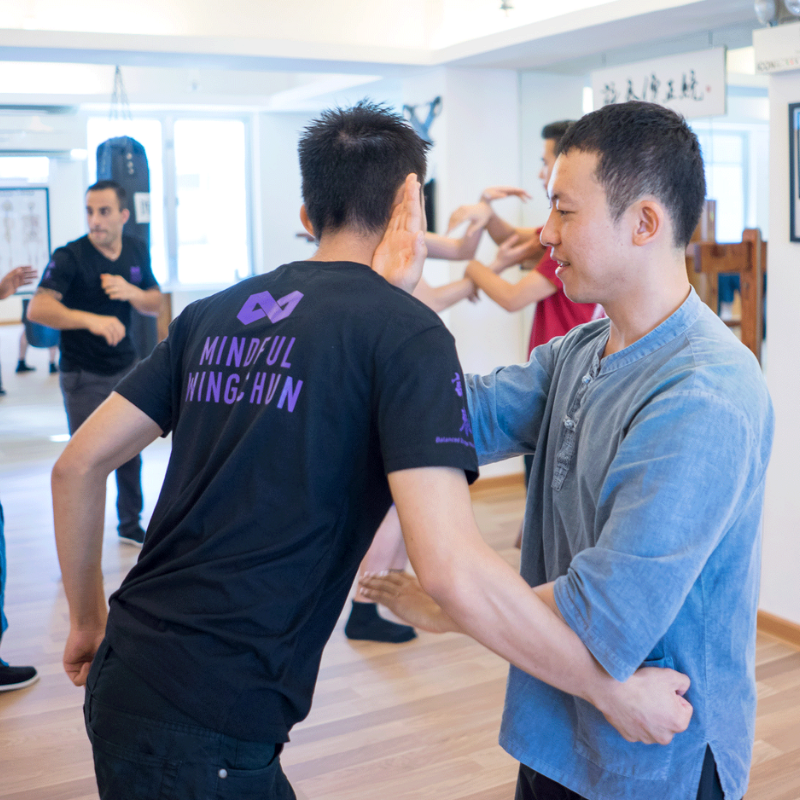 The focus of this class is the application of the self-defence side of Wing Chun. It consists of drills, Chi Sau sparring, free sparring (Wing Chun vs. kickboxing) and pad work. Some other Wing Chun schools choose not to practise free sparring, which could mean that if you find yourself in a real combat situation, you might freeze up in the moment a strike is coming your way; that’s why we believe that controlled sparring is a necessary aspect of Wing Chun training so that you gain sufficient self-defence skills. Furthermore, you’ll get more of a cardio workout and a sweat going in this class compared to our other classes! 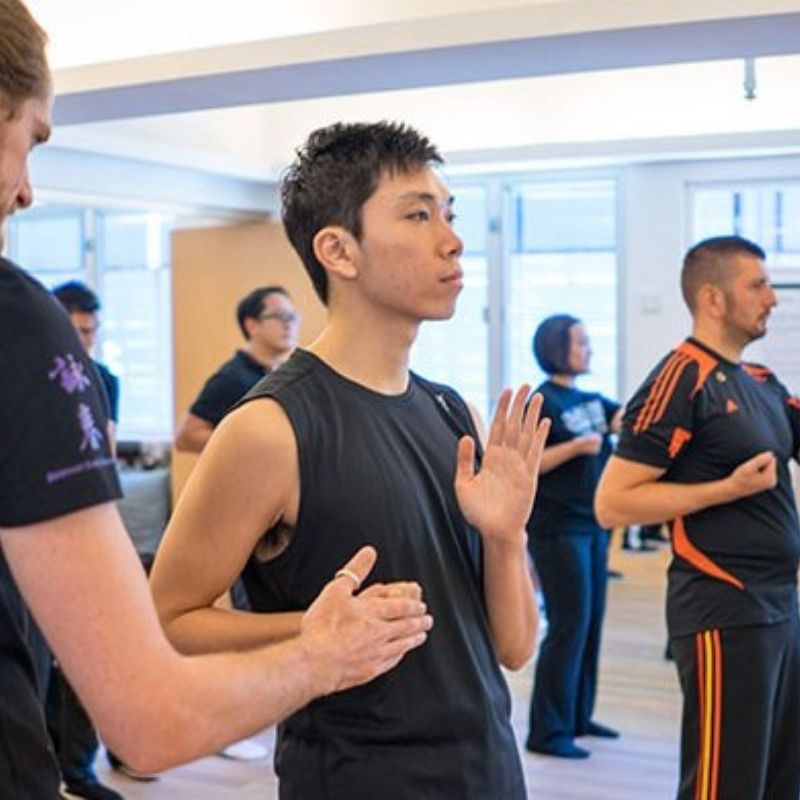 This class is solely dedicated to learning and practising the 6 Form-sets of Wing Chun. Forms are a fundamental part of any type of martial art, however, many students don’t know why the forms are important or what is to be achieved by practising them, so this class is designed to provide a deeper understanding of each of the Forms.

All forms of martial arts are concerned with seeking “strong power”. As Wing Chun Kung Fu emphasises relaxation, many people ask whether relaxation can help develop a strong force. Actually, the main purpose of relaxation is to make sure you can use all your joints and muscles during movements. That way, your ability to receive force is actually much greater, because a relaxed body can take an incoming force like a spring. Have you noticed the way a cat lands after a jump?

Power development is based on the theory of force. Most people know that force is formed from the combination of mass and speed. How then can Wing Chun Kung Fu apply this theory in the development of its power?

Wing Chun has three “empty hand” Forms (meaning no weapons), which together form the foundation of the art: Siu Nim Tau (“Tiny Idea” ), Chum Kiu (“Detecting Hand-Bridge”) and Biu Jee (“Darting Fingers”). Each one of these Forms creates part of the elements of the theory of force, and together they comprise the essence of the Wing Chun system and are exercises and movements that train you to apply the principles and react spontaneously and effectively. 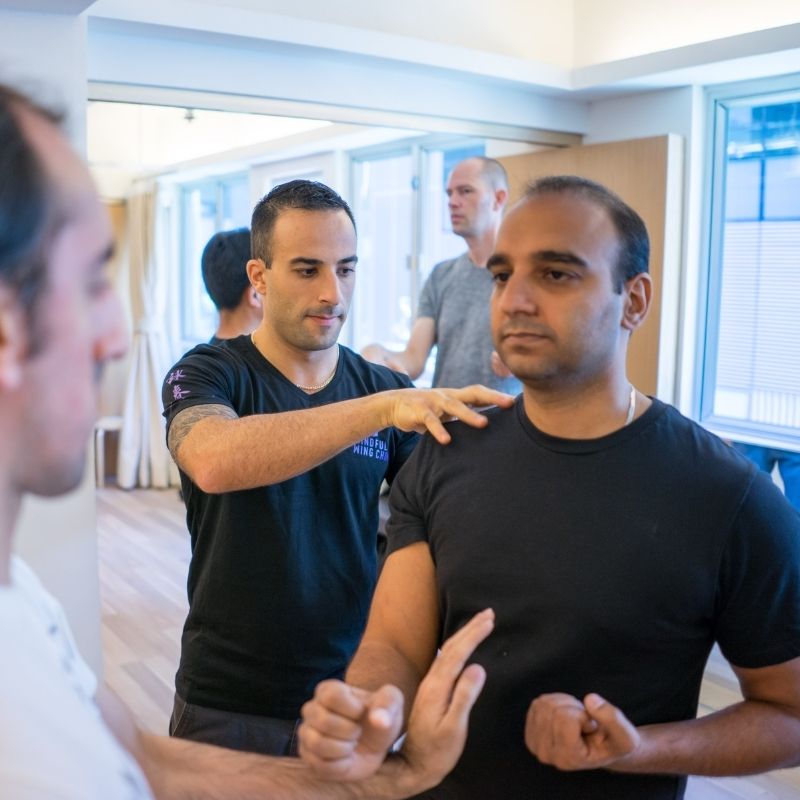 This seniors only class is centred around Chum Kiu and will equip you with a broader insight into our method of Wing Chun.

Chum Kiu can be translated as “Seeking the bridge”.

This is Wing Chun’s 2nd form, and builds upon the foundations cultivated from the 1st form, Siu Nim Tao.

The skills gained here will further develop your ability to generate greater force by tapping into the body’s mass through pivoting and stepping.

You also gain a thorough understanding of the body mechanics involved through the coordination of joints, the mind set that stems from Siu Nim Tao, the force application of each movement, the different types of forces, and the potential applications of each movement and how they translate into Chi Sau practice.

If you’re a senior practitioner, this is a great opportunity for you to deepen your overall understanding of the Mindful Wing Chun method and take your knowledge to the next level. 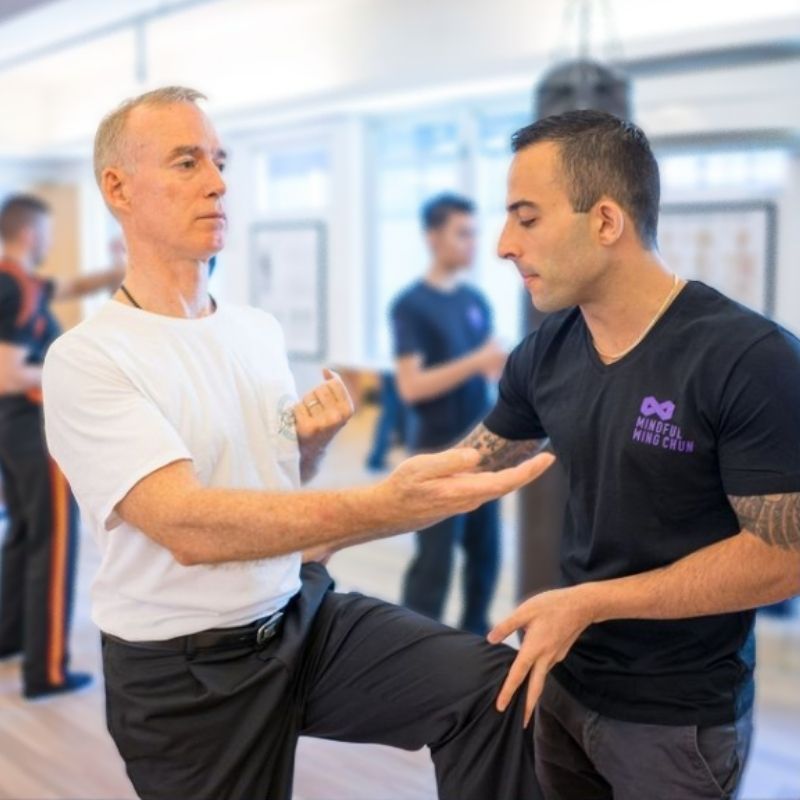 Since our particular system of Wing Chun is both specific and hands-on, 1-on-1 lessons are a great way to supplement your training, because they allow the teacher to delve deeper into any chosen aspect of the training, whether that’s techniques, relaxation, postural correction, pain relief, self-defence…

Many students who lead a busy lifestyle choose to do only private, 1-on-1 lessons. While such lessons are obviously the most efficient method of learning Wing Chun, we still like to encourage all students to attend a group class at least once a week if possible, so they can practise their skills with other students.